At a campaign event in Baxter, MN earlier this month, Republican Jeff Johnson attacked the values of people living in the state he hopes to lead as Governor when he said people in the Twin Cities have different values than the rest of Minnesota — and different values than his own campaign.

According to Jeff Johnson, his values are at odds with 60% of the state’s population. The Twin Cities and surrounding area is also home to 16 of 17 Fortune 500 companies in the state, and the geographic area home to the 13th largest economy in the country. 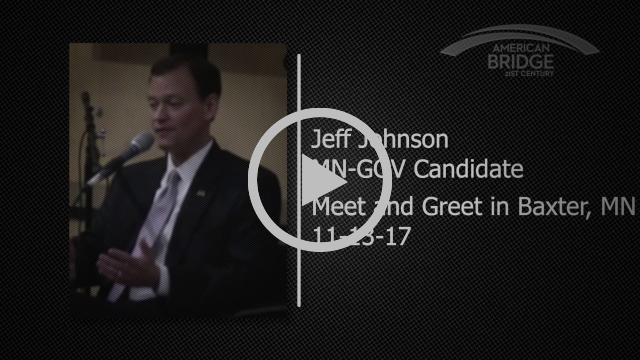 “Jeff Johnson’s divisive rhetoric is nothing short of toxic – Minnesotans deserve a governor who unites the state, not divides it. Minnesota Republicans should condemn Jeff Johnson’s attack on the Twin Cities and the people who live there.”

This isn’t the first time we’ve heard these types of divisive comments from a Republican gubernatorial candidate this year. Virginia’s Republican nominee for governor, Ed Gillespie, was also caught by American Bridge calling the most populous part of his state “enemy territory.”Things didn’t turn out well for him.