During a Gillespie fundraiser on September 14 at the home of Suzanne and Mark Obenshain, Mr. Obenshain notes that he’d seen Gillespie campaigning at a Metro stop in the area, at which point Gillespie jumps in, calling the area “enemy territory.”

“Ed Gillespie has divided Virginians during his entire campaign for Governor – from his hateful campaign advertisements to his policies that would take away health care from Virginians — this is just the latest example of his divisive campaign.” 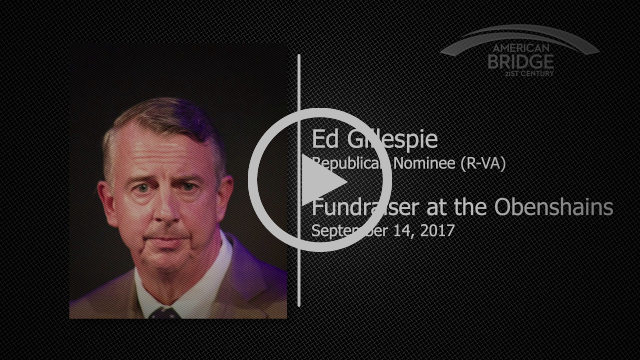 Mark Obenshain: And they are prepared to take Virginia on a hard-left turn, and we have a great opportunity this year. It’s why Steve Landis and (names) have been breaking our backs doing everything we possibly can to help our friend Ed Gillespie become the next Governor of Virginia. Ed is going to do a super job, he’s running an issues oriented campaign, he is taking it to every corner of the Commonwealth of Virginia against an opponent who is camped out inside the beltway and in Richmond. He spends his days at Padow’s Ham Sandwich Shop in Richmond, not meeting with voters, not campaigning, exercising arrogance in this campaign, and our guy is out there, working the streets. I saw him working the metro station just the other day…

Gillespie: “I do, a little bit into enemy territory, but working it.”

Obenshain:  “…and it’s going to make a difference, and you all are making a big difference. We have just had enormous success in asking people, our friends, our neighbors, our supporters to step up and help this campaign this year. We have three great candidates, and um, Bill Hotlzman , where are ya?

Obenshain: You’re back there by the bar?

Obenshain: Bill’s daughter, Jill Vogel, is my colleague, our colleague in the Senate, Jill is doing such a job running for lieutenant governor of Virginia. She’s going to cast that tie breaking vote for us and keep our republicans in control and keep our conservative legislation headed towards this guy’s desk. And we’ve got a guy named John Adams who is a fantastic lawyer. He went to VMI and is proud of it. He worked, he went and served in the United State Navy. He worked after law school as a law clerk to Clarence Thomas and worked as a counselor to the president’s office in the Bush administration. He’s the real deal. He’s the real deal. And if we can get our act together and pull the oars in the same direction, at the same time  in the next eight weeks, we’re going to elect Ed Gillespie governor of Virginia.”

Gillespie: “Mark thank you so much for having me back at your beautiful home and I’m hopeful that the guest bedroom there that Cathy and I used to stay in that you’ll be calling that the governor’s room some day. I truly appreciate everything that you’ve done to be so helpful and I’ve gotta tell ya, Steve and Tony and Dave are part of this team as well. I get so much advice. We’ve worked together on policy that we’ve put forward to run on, because we are running on policies and ideas and solutions and it’s such a difference from what the other side is doing.