Today, American Bridge launched a new digital ad campaign showcasing Ed Gillespie desperate attempts to court his immigrant-demonizing, Confederate-flag-praising primary opponent Corey Stewart. The ad imagines a text exchange between Gillespie and Stewart about a potential endorsement, based off of a recent report by The Washington Post.

Stewart has so far declined to officially endorse Gillespie. During the primary, Stewart nearly toppled Gillespie while railing against him for being a “shady lobbyist,” a “liar,” and “establishment weak-kneed, weak-chinned, weak-jawed Republican.” Since the primary, Gillespie has embraced Stewart and Trump’s immigrant-bashing, race-baiting campaign tactics, and begun courtingStewart with the help of Donald Trump henchman Steve Bannon.

“Ed Gillespie is desperately pandering to neo-confederate Corey Stewart, showing once and for all that he’ll sell out anyone or anything — Virginians, his own dignity — to get ahead. Virginia deserves a governor who stands up to bigots, not one who adopts their disgusting rhetoric and grovels for their endorsement.” 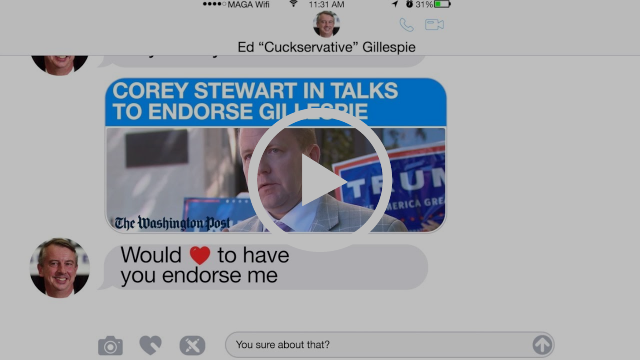