Just a few short years ago, Scott Walker once chastised President Obama after his 2015 State of The Union speech, saying, “Our American revival is not going to be led by a lame duck president who would rather pick fights with Congress.” Will Scott Walker stand by his words by using the same measure of judgement to call out Donald Trump for picking fights with Congress, the media, and pretty much anyone else? Not. A. Chance.

Today, American Bridge launched a web ad highlighting Scott Walker’s hypocrisy in the face of Donald Trump’s belligerence when it comes to fighting with the very people he needs to enact his own agenda. 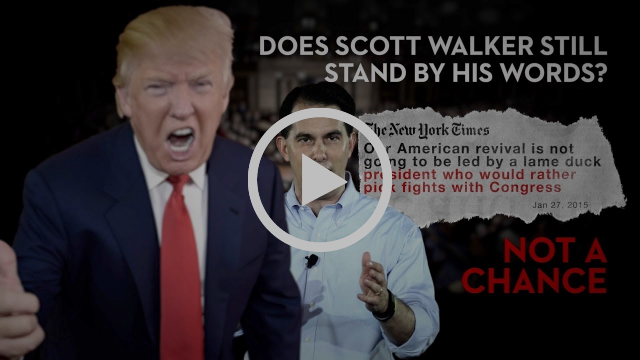 Does Scott Walker stand by his words?

“Scott Walker has supported Trump throughout his Presidency and nothing Donald Trump does – no matter how bad it gets – will change that. Spineless Scott Walker will cower to Trump every time.”