DeSantis is No Hero To Sexual Harassment Victims

Today, Congressman Ron DeSantis announced his campaign for Governor of Florida. The Trump-loving candidate touted his record in Congress, bragging about his bill that would eliminate the Congressional fund used to deal with harassment complaints against Members of Congress.

[See a video of his words here.] 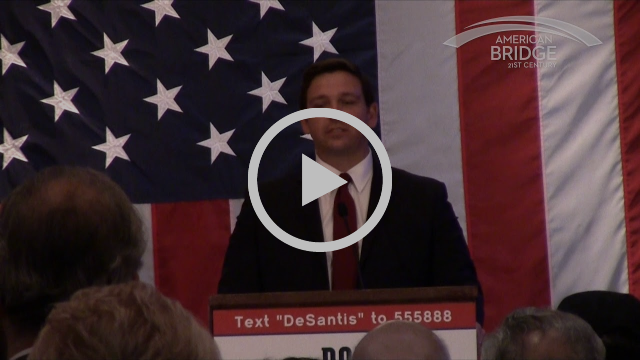 But don’t let DeSantis convince you he’s always been there for victims of sexual harassment. Because he hasn’t. In 2013, DeSantis voted to deny SNAP benefits to women who quit their jobs – even if they quit due to sexual harassment.

“Ron DeSantis’ pathetic attempts to cover up his checkered record of screwing over victims of sexual harassment won’t work. Given his voting record and his strong support of President Trump – whose own serial sexual misconduct has caused Florida Republicans headaches – DeSantis is no hero to sexual harassment victims.”

Transcript: Ron DeSantis: “When news broke that members of Congress were using a secret, taxpayer funded slush fund to pay harassment complaints, I wrote a bill to eliminate the fund and to expose the members responsible for previous settlements and I’m happy to report that i think those core provisions will be in a bill that congress will consider in February.” [DeSantis Announcement, 1/29/2018]

DeSantis Voted To Deny SNAP Benefits To Women Who Quit Their Job, Even If it Was Due to Sexual Harassment

DeSantis Voted For Denying Food Stamps For At Least Two Months To Recipients Who Quit Their Job “Voluntarily,” Regardless Of The Reason. In June 2013, DeSantis voted for an amendment to the Federal Agriculture Reform and Risk Management Act of 2013 that would have effectively denied supplemental nutrition assistance (SNAP) to anyone who quit their job voluntarily. The bill included a reauthorization of SNAP; the amendment would have required each state participating in SNAP to create a “work activation program,” and required, among other things, that “each able-bodied individual participating in the program […] shall not voluntarily […] quit a job.” Those who violated that requirement – or any other requirement for the “work activation program,” would not receive any SNAP assistance for at least two months. The amendment failed by a vote of 175 to 250. [House Vote 283, 6/20/13; House Report 113-117,6/19/13]

But, The Amendment Allowed SNAP Participants To Avoid Work Requirements If They Had For Good Cause. The amendment had other requirements for participants in the “work activation program,” including accepting a job offer that paid at least the applicable minimum wage or, if not applicable, 80 percent of the federal minimum wage; and providing the state with enough information to determine their employment status or availability to work. Both of those requirements allowed violation “with good cause.” [House Report 113-117, 6/19/13]